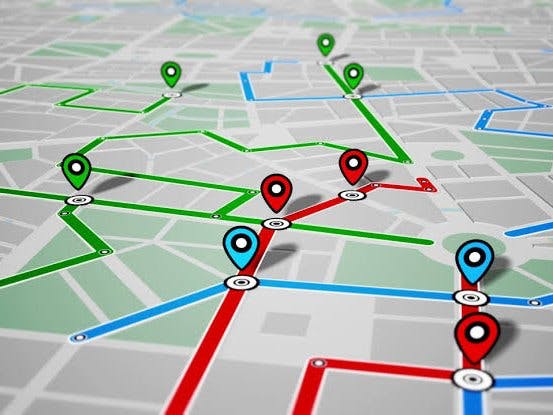 Creating the software to provide the interfaces with the GNSS receiver on the LinkIt ONE development board to collect the data and implement data communications to send that data to the EON dashboard.

Creating publish and subscribe channels using the PubNub API and PubNub LinkIt ONE library to communicate the data with the PubNub Data Stream Network, using the GPRS features of the LinkIt ONE development board.

Putting the components together

This section provides step-by-step instructions on putting the Drone Tracker hardware together.

Attach the GPS+GLONASS and GSM antennas to their corresponding pins on the LinkIt ONE development board as follows:

Insert the SIM card supporting GSM/GPRS communication with a network provider operating in the 850/900/1800/1900 MHz frequency range and classified as Class 12, as shown below.

SIM card slot on the LinkIt ONE development board

The power source in this tutorial is a polymer lithium-ion battery, one is included in the LinkIt ONE development board kit. Attach the battery source to the Li-Battery (3.7~4.2V) socket, as shown in the figure below.

Configuring your device and its GPRS settings.

Create a new PubNub App for the Drone Tracker

A PubNub app serves as an interface between your device and the network. Once you've registered your PubNub account a default project is created, as shown below.

The Publish Key and Subscribe Key define the app and will be used in your Arduino sketch to communicate the data from the board to the PubNub Data Stream Network.

Overview of the Arduino sketch

To create the device that will track your drone and pass the data to PubNub, an Arduino sketch is implemented, verified and uploaded to the LinkIt ONE development board. The source code is provided in a GitHub repository.

A setup() function that initializes resources, such as the GPRS module.

A loop() function that continuously listens to and processes events from hardware and software modules such as those for GPS and GPRS. The loop() function runs forever — until the device is shutdown.

Before you can write the code for your sketch you need to create it, which is achieved as follows:

1) Open Arduino IDE and by default, a new sketch is created and displayed.

2) Create a folder named DroneTracker in your documents folder and on the File menu click Save As navigate to the selected folder, create a .ino file for our code

Add the header files for the supporting libraries

The libraries that provide GNSS and GPRS support are part of LinkIt ONE API and are added as follows:

More details about these libraries can be found in the LinkIt ONE API guide.

The SPI communication header file, from the Arduino SPI library.

From the PubNub LinkIt ONE library, add the PubNub.h and PubNub.cpp files to the same directory as your .ino project. And modify the content of the PubNub.h header file so it includes the LGPRS library support for GPRS communication, as shown below.

Then include the library header in your project.

Next, you add two custom libraries that offer features to parse the GPS latitude and longitude data to an appropriate String format to pas the PubNub.

Next, the static variables used in the sketch are defined.

1) ledPin to match the GPIO pin 13 to alert the user, by blinking the onboard LED, whenever there is a publish or subscribe event triggered.

2) PubNub publish and subscribe keys. These keys are associated with your PubNub app created earlier, see Create a new PubNub App for the Drone Tracker.

Now the setup() function can be defined, to start the various services that will be used by the sketch.

1) Initiate Serial communication with a baud rate of 9600 and print a message "Serial setup" to the serial output.

2) Establish communication over GPRS in a while loop, by calling the attachGPRS method of the LGPRS class. Replace the three parameters of the attachGPRS method with your network provider's information for the access point name, username and password. Allow one second of waiting time before reconnecting to GPRS in the while loop by calling the delay(1000) function. Once it's connected, send the "LGPRS setup" message to the serial output.

4) Start GPS signal reception by calling the powerOn() method of the LGPS class.

The loop() function is executed continuously providing formatted GPS coordinates such as latitude and longitude and communication with PubNub. The function call hierarchy is provided in the figure below:

The GPS data is acquired and formatted using the custom build functions described in the Car Tracker Tutorial.

2) Create a data string upload_GPS as a combination of latitude and longitude to upload the location information to PubNub.

3) Provide continuous communication to PubNub by:

a) Publishing a message over the GPRS connection.

Define a client object of LGPRSClient class and printout a message "publishing a message" to the serial output. The client object is then assigned to the PubNub published message.

b) Call the connected() method of client object in a while loop, read the message and print it out to the serial output.

c) Stop the publication of messages on PubNub over the GPRS connection by calling the stop() method of the client object, then blink the LED as a confirmation with the flash(true) function.

This complete the code needed in your sketch.

With the code complete, you can now upload the sketch to your board. Once this is completed, you can monitor the serial output in Arduino and will see something similar to the following:

You can also view the published messages on the PubNub App Debug console.

1) In the Quick Links menu of your PubNub app, click Debug Console.

Congratulations, you now have a device that tracks your drone by publishing GPS data using LinkIt ONE GPRS support for the PubNub LinkIt ONE Library.

For the tracker to be a practical tool you will want to display the GPS data on a map. An option for doing this is Mapbox.

To start you will need to create a Mapbox account.

A new project on Mapbox

2) Select a style for the map.

3) Navigate to Project from the top menu, then Settings to name your project.

Name your project in the Settings tab

Obtaining your project's API access token and a Map ID

Each Mapbox project is identified by an API access token and a Map ID, which you can find in your project details:

These identifiers will be used to specify the Mapbox map and display the GPS location gathered from the Drone Tracker on the EON dashboard.

The location data acquired by the LinkIt ONE development board and communicated to the PubNub Global Data Stream Network can now be visualized using your Mapbox map from the data on the EON real-time dashboard. To achieve this you need some JavaScript code to establish the data communication and connectivity with the data published on PubNub.

The detailed description of the EON maps and examples could be found at the EON Maps GitHub Repository.

To create your drone tracking map:

2) Navigate to examples folder located in the eon-map folder of the cloned repository.

3) Create and save an HTML file in the examples folder.

4) Add the content for the CSS and JavaScript supporting files from Mapbox (mapbox.css and mapbox.js) and PubNub (pubnub.min.js and pubnub-mapbox.js) as follows:

5) Provide the subscribe key of your PubNub account and define the data communication channel for the Drone Tracker. The channel name should match the one defined in the Arduino Sketch, see Define the variables.

8) Open the saved HTML file in your browser and enjoy the real-time tracking of your drone.