Cool Flushes band keep track of women health,detect and track the Monopause and Hot flashes and keep them cool in sudden hot Flushes.

Cool Flushes band keep track of women health,detect and track the Monopause and Hot flashes and keep them cool in sudden hot Flushes.

Hot Flushes and irregular heart beat one of the most common problem faced during monopasue. Sudden feelingng of extensive hot and sweat cause uncomfortable environment for women. "WITH THE HELP OF TECHNOLOGY "these symptom can be combat.

Our Cool pause device detect both of the symptoms and help to face and combat such sudden effect of monopause. The LM35 sensor and Max30100 sensor inside the device continuously measure the body temperature , heartbeat and oxygen percentage and detect any sudden change in temperature and feel of hot Flushes and it automatically triggers a thermoelectric peliter device that is in touch with skin to absorb the heat and make the body cool.

As the device is weard on the wrist the same area where we detect the pulse. Tahat part of wrist have a good number of blood veins and arteries passing through. This device absorb the heat from those arteries and veins and makes the blood cool and as that cool blood circulates in body and again the blood passing through that part is cooled by device and results in regulating the body temperature just in matter of few seconds and help in combating the sudden cause of hot flashes.

The device also monitor the blood oxygen and pulse rate and detect the abnormal pulse rate and irregular beat then it send message to a app connected to this device through Bluetooth. The app warns the women about monopause and start tracking the activity and ask to do a 10 minutes of meditation. So that the harmonal change and sudden change in heart beat come to normal again.

Here is the 3d design of our device that consist of body heat regulating system, sensors and battery settings inside our device.

Equipment inside the device
This is how out device is designed

We have used thermoelectric module and a heat sink with a fan that absorbes the heat from body and transfer to sink and the fan.

We have to put the thermoelectric module and small 3.3v fan as in shown model.

3d view of our heat regulator

Fixing the parts on lower side of device.

Now after connection we fix the components as in Figure above.

Next we will make a sure the sensor will set in square hole opening to so that the it can read the body temperature and pulse rate. As in Figure below.

Setting and fixing of sensor and thermoelectric module

Now put the cover of device above the lower part . For prototype you can make this with cardboard or 3d printable file. The design file attached with article. You can also modify the design and customise as needed the cad designning file can be downloaded from the bottom cad section of the article.

Now fix a leather bealt or any chain so that you can wear it on your hand.

Now open the cover of devide and then upload this code to Arduino and then close the cover again.

Next we will make the app for our device. First of all open the kodular app bulider and then crrate a layout as in pic below and add the following components to the layout

Now join the cide logic blocks as in pic below.Then export the apk and install the app in your phone.

Now wear the device that we have made and then connect to app that we have made when the app get connected it start showing the health data and it will also save the data during monopause in text file to study the duration of monopause and to track monopause. When it detect the irregular heartbeat it notify you and ask to do meditation .when the device detect sudden rise in temperature it automatically start cooling your body by triggering thermoelectric and fan module inside device. It makes you cool and relaxed in just matter of 30seconds. 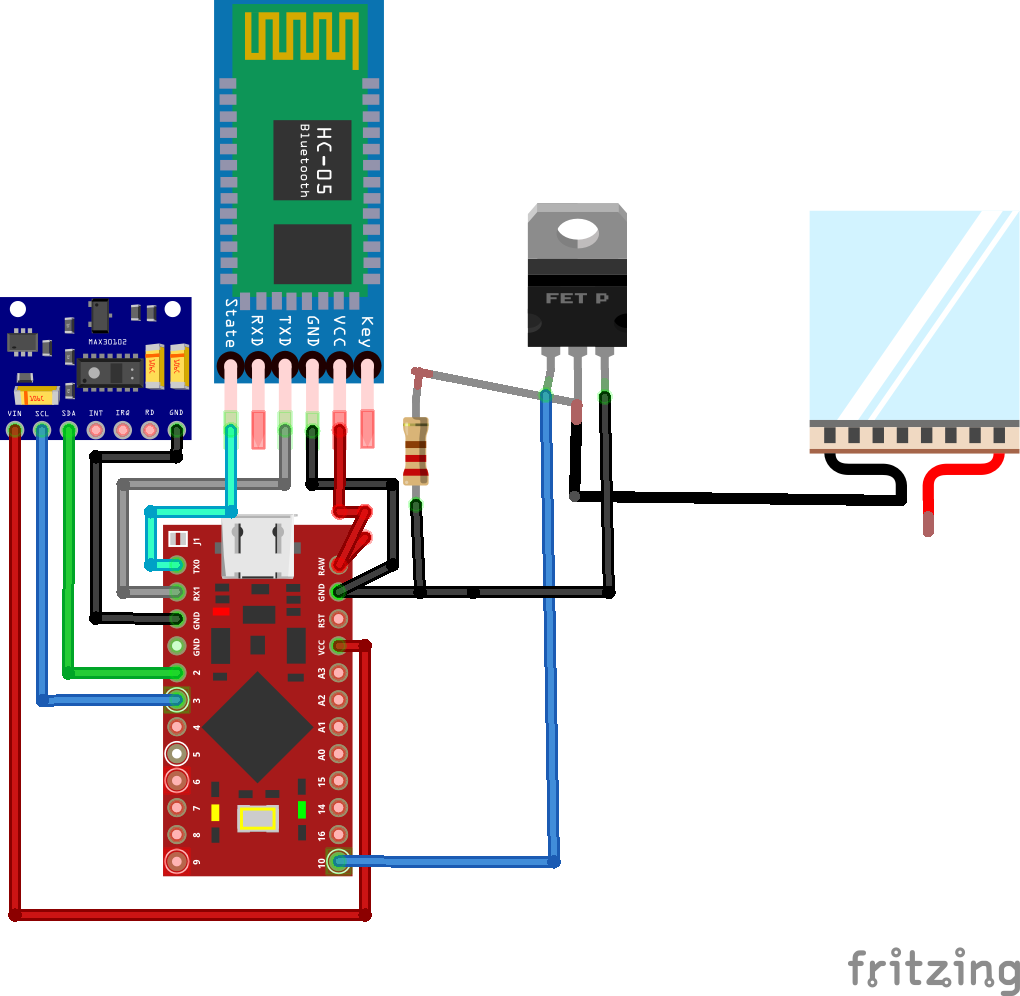