Walabot - Power to the Makers 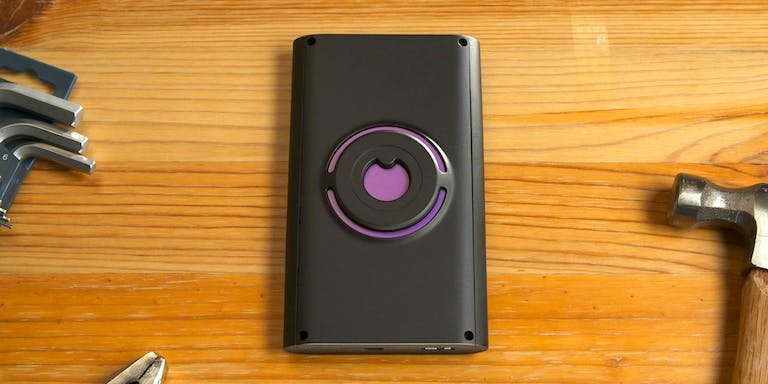 This contest is over! See all the winning entries. Want more chances to win prizes? Check out our active contests.

Employees or agents of the Sponsor (as defined below) and each of their respective affiliates, subsidiaries, advertising/promotional agencies, providers, suppliers as well as their immediate families (spouse, parents, siblings and children) or those persons living in the same household of such individuals are ineligible to enter or win. The Contest is subject to all applicable federal, state, city, county, and local laws and regulations.

Winners will be selected based on the following criteria:

Employees or agents of the Sponsor (as defined below) and each of their respective affiliates, subsidiaries, advertising/promotional agencies, providers, suppliers as well as their immediate families (spouse, parents, siblings and children) or those persons living in the same household of such individuals are ineligible to enter or win. The Contest is subject to all applicable federal, state, city, county, and local laws and regulations.

The Contest is sponsored by Vayyar Imaging Ltd., a company organized under the laws of Israel, having its principal place of business at 3 Avraham Giron Street, POB. 325, Yehud 5621717, Israel (the “Sponsor”).

Participants will be entitled to enter into the contest by completing the following actions: (1) Creating a software application which run either the WalabotPro, Maker or Starter versions of the Walabot application (the "Application"). The Application must be creative and must meet any and all criteria included in these terms. The Application must be freely available for use on Walabot’s Github page https://github.com/Walabot-Projects and website walabot.com, indefinitely; (2) Creating a video describing the Application (the "Participant's Video") and sharing the Participant's Video on YouTube and providing a link for the Participant’s Video. Sponsor shall be entitled to share the Participant's Video on his pages on any social media (including but not limited to Facebook, Youtube and Twitter) and/or publish the Participant's Video using any other media (including for commercial purposes), and (3) Submitting the application code on the contest page, https://www.hackster.io/contests/walabot, during the term commencing on November 22nd 2016 and ending on May 14th 2017 (the "Contest Period" and respectively the “Contest”). The Sponsor is entitled to change the Contest Period at its sole discretion.

ENTRANTS BOUND BY THESE OFFICIAL RULES

Your Entry into the Contest constitutes your full and unconditional agreement to and acceptance of these Official Rules and the decisions of the Sponsor, which are final and binding. If you are named the winner, delivery of the prize is contingent upon fulfilling all requirements set forth in these Official Rules.

Failure to comply with these Official Rules may result in your disqualification from the Contest at the sole discretion of the Sponsor.

Number of Total Winners during the Contest: Fifty three (53).

NOTE: The prize is not interchangeable and the winner shall not be entitled to any other prize. The winner is solely responsible to do all and any actions required to receive the prize, on its expense. The winner is solely responsible for all taxes and fees associated with prize receipt and/or use. No alternative prize or other substitution, sale, auction, donation, assignment or transfer of the prize is permitted.

Sponsor may choose any Application and make such Application available to any and all Walabot users, without giving any notice to the Participant.

To the fullest extent permitted by law, in exchange for the opportunity to enter and participate in the Contest and win the prize, you waive, release and hold harmless ("Release") any and all rights, claims, damages, liabilities, costs, attorneys' fees, expenses, and causes of action whatsoever ("Claims") that you may have against the Sponsor and its officers, directors, employees and agents (the “Released Parties”). This Release covers, without limitation, any claims arising directly or indirectly out of your entry into and participation in the Contest, your status as an entrant, finalist and/or a potential and/or actual winner, including, without limitation, claims based on personal injury, death, property damage, libel, slander, defamation, invasion of privacy/publicity, portrayal in a false light and any claim relating to the Sponsor's exercise of the publicity rights you have granted to the Sponsor hereunder. Further, you hereby release the Released Parties from any third party intellectual property claims arising from or in connection with your entry. This Release survives the expiration of the Contest.

You agree to release, indemnify and hold Sponsor harmless from any Claims in connection with the Contest, or resulting from acceptance, possession, or use of the prize, including without limitation, personal injury, death and property damage, and Claims based upon intellectual property infringement, publicity rights, defamation, or invasion of privacy as well as Claims arising out of your breach of these Official Rules. 

EXCEPT WHERE PROHIBITED BY APPLICABLE LAW, PARTICIPATION IN THE CONTEST CONSTITUTES YOUR CONSENT TO THE SPONSOR'S USE OF YOUR NAME FOR PUBLICATION THAT YOU HAVE WON THE CONTEST FOR PROMOTIONAL PURPOSES, WORLDWIDE, WITHOUT FURTHER PAYMENT OF CONSIDERATION TO YOU AND WITHOUT OBTAINING ANY PRIOR APPROVALS.

COLLECTION AND USE OF PERSONAL INFORMATION

The Sponsor will collect personal information from you and the other entrants that will be used by the Sponsor in connection with the conduct of the Contest including (but not limited to) notifying you and the other entrants if you are chosen as a finalist. The information will be treated in accordance with the Sponsor's privacy policy: https://walabot.com/walabot-privacy-416.pdf

By participating in the Contest, Participants expressly acknowledge and agree that they are entering a legal agreement with Sponsor and have understood and agree to comply with, and be legally bound by, these terms and conditions. The Sponsor reserves the right to cancel, postpone, suspend and/or modify the Contest for any reason as determined by the Sponsor in its sole discretion. The Sponsor reserves the right in its sole discretion to disqualify any individual it finds to be: (a) providing false information; (b) tampering with the operation of the Contest; (c) in violation of these Official Rules; or (d) acting in a fraudulent or deceptive manner. Any attempt by any person to deliberately undermine the legitimate operation of the Contest may be a violation of criminal and civil law, and, should such an attempt be made, the Sponsor reserves the right to seek damages from any such person to the fullest extent permitted by law. The Sponsor's failure to enforce any of these Official Rules shall not constitute a waiver of that provision. The Sponsor is not responsible for (i) lost/delayed entries; (ii) email failures; (iii) any printing errors; or (iv) typo-graphical errors.

1. The Released Parties are not responsible for: (1) any incorrect or inaccurate information, whether caused by you, printing errors or by any of the equipment or programming associated with or utilized in the Contest; (2) technical failures of any kind, including but not limited to the malfunctioning or unavailability of any computer, cable, network, hardware, software, Internet service or website; (3) unauthorized human intervention in any part of the entry process or the Contest; (4) technical or human error which may occur in the administration of the Contest or the processing of entries; or (5) any injury or damage to persons or property, including but not limited to your computer, hardware or software, which may be caused, directly or indirectly, in whole or in part, from your participation in the Contest or receipt, redemption or use of the prize.

YOUR PARTICIPATION IN THE CONTEST IS AT YOUR OWN RISK. SPONSOR HEREBY DISCLAIMS ANY AND ALL WARRANTIES, EXPRESS, IMPLIED, STATUTORY OR OTHERWISE WITH RESPECT TO THE CONTEST. SPONSOR SHALL NOT BE LIABLE FOR ANY DIRECT OR INDIRECT DAMAGES AND/OR EXPENSES ARISING OUT OF OR RELATED TO YOUR PARTICIPATION OR INABILITY TO PARTICIPATE IN THE CONTEST AND/OR YOUR USE OF THE PRIZE, OR FROM ACTS OF MISCONDUCT OF OTHER PARTICIPANTS OR THIRD PARTIES.

UNLESS PROHIBITED BY LAW, SPONSOR LIABILITY SHALL BE LIMITED TO ONE U.S. DOLLAR (US$1.00). 

These Official Rules are governed by and construed under the laws of the State of Israel, excluding its conflicts of law rules. Except where prohibited, you agree that: any and all disputes, claims and causes of action arising out of or connected with the Contest or any prize awarded, other than the administration of the Contest or the determination of winners, shall be resolved individually and exclusively, without resort to any form of class action, in Tell-Aviv Jaffa, Israel.

Contest results will be posted on the Sponsor's Facebook business page and/or on the Sponsors official site available at: www.walabot.com/contest and Hackster page https://www.hackster.io/contests/WalaBot.

OWNERSHIP OF THE APPLICATION

By participating in the Contest Participant hereby grant, free of charge, users, Sponsor and any person obtaining a copy of the Application a license to use, copy, modify, reproduce, distribute, prepare derivative works of, merge, display, publish, sell copies of the Application, commercialize and perform the Application and the Participant's Video, such license shall be subject to the terms and conditions of the MIT License as detailed on http://choosealicense.com/licenses/mit/ unless agreed otherwise under these terms and conditions.

Participant agrees that the Application shall not include content which: (i) is copyrighted, protected by trade secret or otherwise subject to third party proprietary rights, including privacy and publicity rights, unless Participant is the owner of such rights; (ii) creates a risk to a person's safety or health, creates a risk to public safety or health, compromises national security, or interferes with an investigation by law enforcement; (iii) impersonates another person; (iv) promotes illegal drugs, violates export control laws, relates to illegal gambling, or illegal arms trafficking; (v) is unlawful, defamatory, libelous, threatening, pornographic, harassing, hateful, racially or ethnically offensive, or encourages conduct that would be considered a criminal offense, gives rise to civil liability, violates any law, or is inappropriate; (vi) involves theft or terrorism; or (vii) is otherwise malicious or fraudulent. Sponsor reserve the right to reject (on its sole discretion) any Application that includes such content.