A robust, inexpensive, yet powerful collision detection system for the purpose of small autonomous robots

A robust, inexpensive, yet powerful collision detection system for the purpose of small autonomous robots 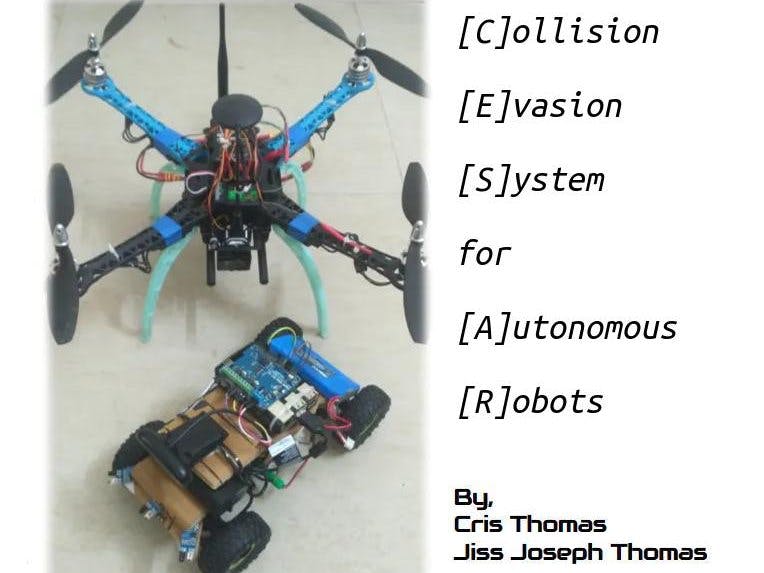 There are hardcore expensive collision detection and avoidance systems available to use for autonomous cars. But they tend to work on top of highly sophisticated and expensive hardware and software requiring high power computations, lidar setup, etc. But this setup is not suitable for small robots, especially drones and rovers which rely on limited computational power and resources.

With this project, we try to bridge this gap. By using low cost and immediately available parts, we are developing a robust, yet powerful collision detection system for the purpose of small robots such as drones, rover, etc. This will cost only a fraction of the setup used in sophisticated systems, and without compromising on performance, scalability, and reliability.

An example use case is for swarm robotics. Our implementation allows the participating robots to be connected to an IoT network and communicate with each other for better planning an evasive maneuver.

Existing solutions that are similar to this use either low-performance computing modules or a ground station based remote processing system. Both these solutions allow neither an efficient computing nor AI at the edge processing for better performance. The main advantage of our implementation is that it can be scaled up easily to be incorporated on large and advanced autonomous vehicles such as driverless cars, drone transports, etc. It also removes the drawbacks of the existing solutions by implementing at the edge computing without compromising on the performance.

The workflow will be split into two parts:

The interface that acts as a link between the hardware and the software is the ROS or Robot Operating System. This interface will take care of the message translations between various internal and external units of the system. ROS provides low-level device control and hardware abstraction. ROS enables us to read data from a variety of sensors to manipulate it and provide a computed output. It comprises of a number of independent nodes, each of which communicates with the other node using the publish /subscribe messaging model.

A node can be considered as the basic unit in ROS. There can be nodes for each task, such as taking images from a camera, processing the image, driving a motor, etc. They are in charge of handling the devices and their interfaces. All the nodes are registered to a master ROS server called as roscore. It is similar to a lookup table where all the nodes go to find where exactly to exchange messages. When a node registers itself to the master, it also tells to what topics it will publish and what topics it will subscribe to.

A topic is a stream of data in a particular structure that is used to exchange messages or information between the nodes. Example of the topic is String, Float32, PoseStamped, etc. Each topic will have a unique name and a particular message structure. A node can subscribe and publish to a number of unique topics. However, it cannot subscribe and publish on the same topic.

A normal camera uses the pinhole concept. There the points in 3D are transformed and converted into points in 2D. This causes a loss of depth information from the scenes. Say, if we have x,y, and z coordinate points in space, where z being the depth, the pinhole or 2D camera only registers the x and y information and discards z.

The concept of stereo vision is originated for the vision of human eyes. The human eyes are placed at an average distance of 6cm apart. Each of our eyes receives a 2D image of the scene. Each of this 2D image is different and varies at an angle according to the eye that receives the scene. These 2D images are sent to our brain who interprets these images through fusion. The disparity information is then extracted which gives us a perspective of the scene in 3D. Multiview geometry is closely linked to epipolar geometry.

Stereo processing involves the processing of a calibrated pair of pictures obtained from a stereo camera. Since the stereo images are taken at different angles, the information contained in both the images associated with a particular scene in 3D can be used to produce a depth map.

The images that we get from the cameras are just unrectified images. They are not compensated for the horizontal and vertical alignment. Rectification is done to making the image streams from both the cameras to be aligned horizontally and vertically. It involves the transformation of the projected image into a common plane.

The fundamental matrix (F) and Essential matrix (E) are formed to rectify the image. The fundamental matrix relate the two cameras in their pixel coordinates. By matching points from both the images, a point in one image is mapped to the epiline in the other image. The essential matrix gives information relating to the position of the second camera with respect to the first one in real 3D coordinates. Image rectification ultimately warps both the images in such a way that they appear as if they have been taken with only a horizontal displacement. This process makes all the epilines to be perfectly horizontal. After the rectification, each of the cameras has to be calibrated for use as a stereo pair.

A custom stereo camera was made from two Microsoft HD webcams and was calibrated.

Camera calibration involves obtaining the intrinsic and extrinsic parameters of the cameras done using the pinhole camera concept. A pinhole camera is a small camera with a small hole installed in place of the lens. The aperture hole allows the light rays to pass through, producing an inverted image on the opposite side of the camera. This effectively converts the 3D image into a 2D image.

The intrinsic camera matrix, K is defined as:

The camera image parameters are set using the flags CAP_PROP_FRAME_WIDTH and CAP_PROP_FRAME_HEIGHT. The figure below shows the sample test images that were taken for calibration. The images were taken with a chessboard of 8x6 size.

These chessboard picture pairs will be used to detect the corners and use these corners to calibrate the two cameras. findChessboardCorners() and calibrateCamera() methods will be used in this process. A maximum of 64 image pairs containing the chessboard in the scene is chosen at random taken for the calibration. The determination of rotation and vertical offset between the two cameras is computed by the function stereoCalibrate().

The disparity between the two images are usually calculated via a block matching algorithm. These stereo images have to be rectified to account for the horizontal alignment. Simply saying, block matching is the process of taking a test portion (pixels bounded by a region, known as a template) in either of the image (reference image) and searching for the closest match among pixels bounded by similar region (block) in the other image (target image). Initially, the search starts at the same coordinates on the target image, like that on the reference image. Since the images are rectified in the previous steps, the corresponding pixels of both images lie in the same horizontal levels. The matching algorithm will swipe through the target image towards the left or right until it finds an appropriate match. For ease of computation, the images are converted into their corresponding greyscale, which limits the search to a range of (0,255) in the pixel values.

When it finds a match, the disparity will be the difference in the values of the centroids of the search boxes used. The closest matching block is computed using the method called Sum of Absolute Differences or SAD. In this method, each pixel value of the template is subtracted from the corresponding pixel value of the block. The absolute value of this difference is taken and it is summed up with the differences calculated between the rest of the pixels from template and block.

The resulting single value determines the similarity between the template and the block. If the SAD value is low (minimum cost), the mages are more similar. Else, they may be dissimilar. For computing the best similarity, after computing the SAD, the block with the lowest SAD value is chosen. The maximum disparity will determine how far we need to search horizontally until a match is found. In addition, the template size will determine the amount of matching and SAD calculation being done on the image pair. The larger the template, the less noise will be present while generating the disparity map. For accurate subpixel measurements, minimum cost, as well as neighboring cost values, will be considered for the match.

The noise can be further reduced by tuning the parameters numDisparities and blockSize. An example of a disparity image obtained from left and right stereo images.

Disparity mapping was carried out to formulate the depth from the scene and thus detect obstacles.

From Intel, The OpenVINO™ toolkit is a comprehensive toolkit for quickly developing applications and solutions that emulate human vision. Based on Convolutional Neural Networks (CNNs), the toolkit extends CV workloads across Intel® hardware, maximizing performance. Install the Rpi version from this tutorial.

MonoDepth produces a disparity map for a given input image with edge processing done at an Intel Movidius Compute Stick. As a start, I am using the MonoDepth application from the Intel VINO toolkit.

To be able to build the MonoDepth program, you need to source InferenceEngine and OpenCV environment from a binary package that is available as proprietary distribution.

Please run the following command before the demos build (assuming that the binary package was installed to <INSTALL_DIR>):

Go to the directory with the build_demos.sh script and run it:

Or do it manually as:

Navigate to a directory that you have write access to and create a build directory.

Go to the created directory:

Run CMake to generate the Make files for release or debug configuration:

Run make to build the demos:

The application binaries are in <path_to_build_directory>/intel64/Debug/.

Now execute the following to activate it and run.

I have rented an NCS 2 from a friend to try out the inferences.

For achieving this we use the monodepth_demo.py which is already included in as the part of the OpenVINO kit. Additional optimization and upgradations are currently under progress. The application outputs are the floating disparity map (PFM) as well as a color-coded version (PNG) and take advantage of the Zero-shot Cross-dataset Transfer principle as described in this paper.

The evasion algorithm is carried out in the ROS environment. Here the use case is a drone and appropriate drone maneuver commands are passed for evading the obstacle. MAVROS plugins were used here so that it is extendible to any autonomous vehicle. 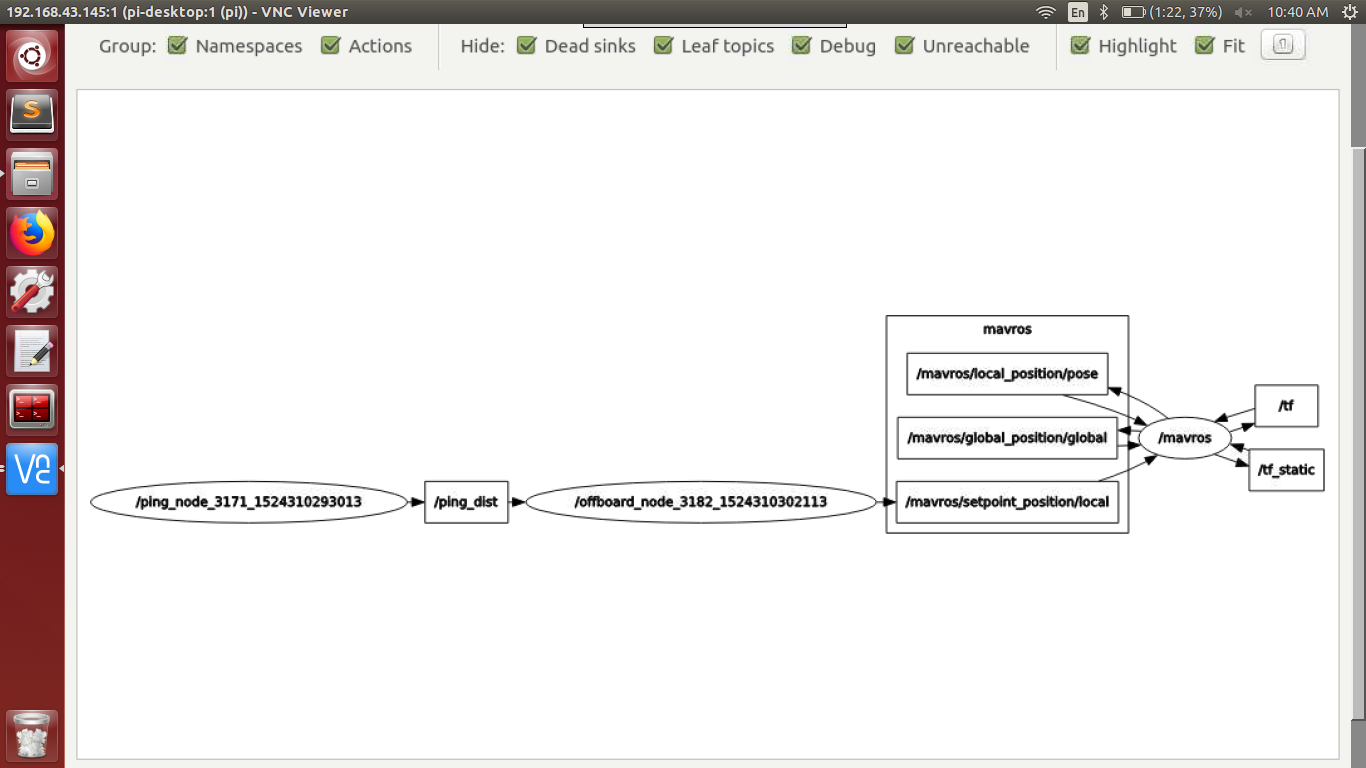