Use this super tiara to boost alertness and shift your circadian rhythms – without chemicals! Updated for the AARP Hacking Menopause contest

Use this super tiara to boost alertness and shift your circadian rhythms – without chemicals! Updated for the AARP Hacking Menopause contest 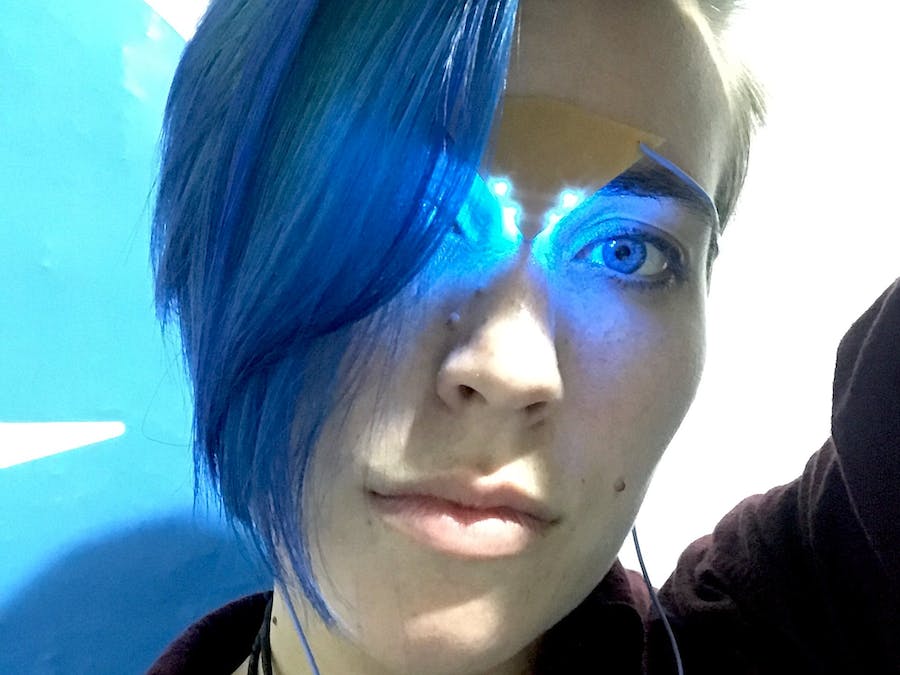 DISCLAIMER: Shining blue light in your eyes can be very dangerous! Before attempting or adapting this project, know what frequencies are safe and effective, and which will damage your vision! Also, learn how to mount them properly (never shine the light directly into your eyes – only across your field of vision)! This is not medical advice. Consult a professional if you have any concerns before building or using this device.

For our ongoing Hacking Menopause contest, I decided to revamp my GlowUp wearable device, which boosts alertness, offsetting some of the symptoms of menopause (as well as seasonal affective disorder and jet lag). It shines blue light across your field of vision, which tells your body that you're seeing sunlight. Using it at particular times of day can help reset your circadian rhythms when you travel, as well as helping you wake up in the morning and stay up later without caffeine. This is similar to a SAD lamp or light box mounted on your face (a study shared by Luminette shows that they can have equivalent effects).

I think this technology is fascinating, so I'm making low-cost DIY prototypes to test it out for myself. However, I'm taking a careful look at the science and design of these devices, because it's true that blue light *can* damage your eyes.

In this version, I'm trying to make it easier to wear, and add a Wonder Woman-inspired "tiara" enclosure, in honor of the theme of the contest. :)

When I first thought about building this type of project, back in 2018, I did some research to find out whether it would actually work. I pulled up three companies already working on this: Propeaq, Ayo, Re-Timer – and later, Pegasi and Luminette. Since this is a new technology (and perhaps to quell fears about blue light in the eyes) many of those companies have chosen to provide information on the science behind them, which meant I could take that info and source my own LEDs.

The ones I use have a wavelength of 475nm. See the end of the "Story" section (LED safety notes) for more info on harmful and useful parts of the spectrum.

The mounting also matters. Never shine LEDs directly into your eyes! All of the existing companies working on this mount the LEDs (usually with diffusers) so that they shine ACROSS your field of view – NOT directly into the eye. That's why I decided to mount mine on their sides. (You can actually get side-mounted LEDs, which shine sideways, but it was tougher to source a specialized package like that with my other specifications.) These 1206 packages are large enough to solder by hand, and I was actually surprised at how easy it was to mount them sideways.

When I designed this, I wasn't sure how bright the LEDs would be, so I made the second pair optional – you can connect or disconnect them, using small soldered wires.

I designed the circuit to have as few components as possible. That meant choosing LEDs that would combine well with a ubiquitous power source. These LEDs have a forward voltage of 3.5V, meaning that each in-series pair of them can easily tolerate 7V. At a lower voltage, they'll still work – they just shine more dimly. So, I was able to make the circuit work without using extra resistors. Now, I also know that resistors are for current limiting, and this device may see damage over time... I am definitely not an electrical engineer – I just know that this works, for a prototype.

For convenience, the whole thing is designed to be powered at 5-ish volts from a power brick or computer port. So, I've used Adafruit's wonderful silicone-coated wire to run to either side of the PCB – ground on one side, positive on the other – and they come together to attach to a USB-A plug. As usual, I just cut up an existing USB cable I had lying around, and I used enough of the hookup wire so it goes around either side of my head, making the device wearable. I'll eventually reinforce everything with hot-glue, and add an enclosure on top (based on Wonder Woman's tiara).

So, I designed a simple PCB in Patchr.io:

The final PCB looks a little different. It has two completely separate pairs of LEDs – each pair consists of two LEDs in series, and the two pairs are connected in parallel (see pictures below). Depending on the desired brightness, you can either bridge the large solder pads, or leave them disconnected. If you wanted to be able to change the brightness at will, you could add a switch across those pads.

I cut the circuit board out of single-sided PCB substrate, using the Bantam desktop PCB mill.

I'm using surface-mount LEDs (1206 package), but I needed them to shine outwards (to the sides of the PCB), so they'd shine across my field of vision. So, I soldered them on their sides:

I wasn't sure about the amperage my little USB charger could supply, so I made the inner pair of LEDs optional. If you desolder one of the jumpers, that pair is disabled. But, it's pretty bright with both pairs on there.

Before building my first prototype, I pulled up five companies already working on this: Propeaq, Ayo, Pegasi, Re-Timer, Luminette.

This is the perfect time for me to design a DIY version, because the science already has some solid proof (including deployment by NASA), but it's new enough that these companies have to show their work to convince the public.

Each company has different guidelines for usage; the duration depends on the intensity of the light (for example, Luminette: "Intensity 1 = 45 minutes, Intensity 2 = 30 minutes, Intensity 3 = 20 minutes"). Most say 20-30 minutes, and that's probably what I'll go for. However, I need to figure out how to measure the actual

Harmful Effects of Ultra-violet and Blue Light Ultra-violet light is that portion of the spectrum of invisible light below 286nm to 400nm, and is generally understood to be harmful to the eye, possibly leading to cataracts and other eye diseases such as age-related macular degeneration (AMD). Retinal damage is the most important hazard from light. The three types of retinal damage are structural, thermal and photochemical. The type of damage depends on the wavelength, power level and exposure time.

UV light is divided into three segments, which are designated as A, B, and C, described briefly below in order from least harmful to most harmful to the eye.

UVC (below 286nm) is effectively filtered by the earth’s ozone layer.

UVB (286-320nm) is that solar energy which is the cause of sunburn and snow blindness and is absorbed by the cornea.

UVA (320-400nm) is that part of the invisible spectrum of particular concern to eye care professionals. It is the most damaging of UV radiation, and it is the radiation transmitted to the crystalline lens of the human eye.

Recent studies suggest that the blue end of the light spectrum may also contribute to retinal damage and possibly lead to AMD. The retina can be harmed by high-energy visible radiation of blue/violet light that penetrates the macular pigment found in the eye. According to a study by The Schepens Eye Institute, a low density of macular pigment may represent a risk factor for AMD by permitting greater blue light damage.

From the Review of Optometry:

The LEDs I use in this project are listed at 475 nm, well above the longest wavelength listed as dangerous, and well into the range listed as "essential".

If you are developing your own version of this tech, check out the IEC safety spec on "photobiological safety of lamps and lamp systems".