hWatch is a femtech based wearable IoT development platform for monitoring and supporting women to make their lives better and safer.

hWatch is a femtech based wearable IoT development platform for monitoring and supporting women to make their lives better and safer. 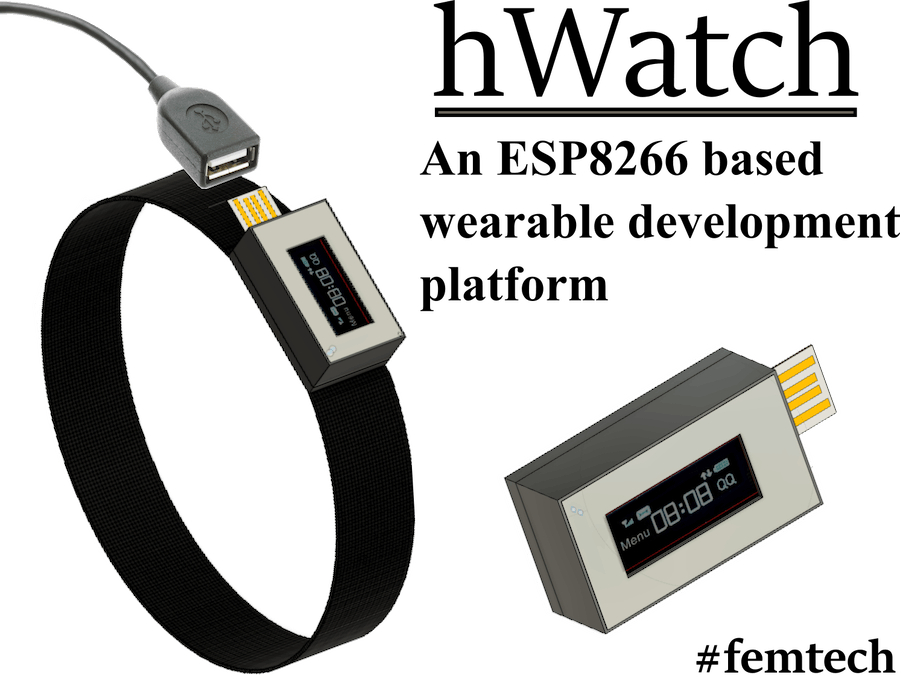 hWatch is an ESP8266 based wearable IoT development platform for supporting women. Women are undergoing through many physical, mental and social challenges in her day to day life. hWatch wearable IoT platform is concentrated in monitoring these challenges and supports her in facing these challenges. The physical and mental challenges are more over genetical to an extent. Here hWatch is meant for fetching data from the feminine body and automatically supports her in the needy situations. As it is mentioned as "development platform", hWatch is like to a be a prototyping or a real-time validating platform for the emerging femtech technology, rather than be like to an end product.

hWatch is basically a health monitoring watch which is designed as it shows the current time as soon as it is connected to a Wi-Fi Hotspot. In Addition to this basic feature there are two sensors and touch switch for giving inputs to the device. The two integrated sensors includes a high precision temperature sensor and a pulse oximetry heart-rate monitoring sensor. The onboard extended touch switch turns on the LCD Display on touching it and other than that, it offers three more different modes of operation, which can be customized according to the need of the person. Thus this device is used for giving inputs from the body, which are further stored and processed in cloud network platform.

ESP8266 (ESP-12E WiFi Module) is the core component of the project to which all the I/Os are connected.

ESP8266 Arduino Library can be obtained from here

Datasheet of ESP-12-E WiFi Module can be obtained from here.

For charging, hWatch can be directly plugged to a 5V USB Adapter or PC or a Power Bank. For giving charge indication or notification, one can program by referring the outputs of CHRG & STDBY signals from battery controller. These signals are connected to the GPIO 12 & GPIO 13 of ESP8266 module respectively. please refer the below table for more information.

Arduino Library for SI7021 sensor can be obtained from here.

Arduino Library for MAX30101 sensor can be obtained from here.

Datasheet of SI7021 sensor can be obtained from here.

Datasheet of MAX30101 sensor can be obtained from here.

Touch switch is used in hWatch for an alternative for push button. The touch switch can be used for the customization feature according to one's need. The single switch can be programmed for executing multiple tasks by controlling On-Time, Off-Time & Number of switchingoperation.

Touch Switch is connected to four GPIOs in total, three for customization feature and one for controlling OLED Display wake up.

The primary use of 0.91" OLED Display is to show time, periodic body temperature and heart rate. Every IO operations can be included to show in display according to the need. The OLED Display communicates using I2C. The Display can be waked up using Touch Switch interface. The Arduino Library for 0.91" SSD 1306 OLED Display can be obtained from here.

Temperature sensor & Heart rate sensor has became the common features of the latest Smart Watches and Smart Bands. Then what is the importance of these in this project......? And why adding customization features to this device...?The researches found that resting heart rates (RHRs) show distinct values for the four phases of menstrual cycle and which opens a wide world for the wearable sensor technology. In simple, we can say that heart rate of women varies during the different stages of menstrual cycles. Researches also founds that the body temperature of a women rises and falls minutely at various stages of menstrual cycles due to the changes in the hormone levels.

So with the help of a wearable sensor technology it's possible to make women aware of the very minute changes in their body prior to different phases of Menstrual cycle. And same technology can be used for supporting her to overcome the impact of physical symptoms of menstruation (or PMS-Premenstrual Syndrome) such as low energy, fatigue, sleeping troubles, back pain, headaches, joint pain, muscles pain, bone loss etc. Both the things can be achieved with the help of a typical mobile application.

Apart from the above, the result of the case study is completely different for Menopause. Because while entering from a proper menstrual cycle to perimenopause stage and from there to menopause stage, the impact of the physical symptoms on the women body will be drastically increasing. For examples, during menstrual cycle, the resting heart rates and body temperature of a women shows very minute variations, But during menopause women are experiencing hot flashes and heart palpitations. Hot flashes are sudden feelings of warmth, which will not raise the core body temperature rapidly, instead it will raise the inner body temperature. So treating hot flashes like normal temperature variation is impossible. Studies and researches also founds that heart palpitations (heart racing or missing beats) also occur in middle of hot flashes. But that too a common symptom of stress during menopause. Thus accurate heart rate and minute body temperature variation should be the main inputs for treating menopause. As mentioned before, Depending on the values of the received inputs from the body, the mobile application should be capable of distinguishing women undergoing through different stages of menstruation and should notify them with proper tips and suggestions to overcome the impact of the physical symptoms.

Touch-Switch customization will be a very useful feature for every women since they are undergoing through impact of mental stress and mood swings due to menses. The physical and mental impact of the menstrual and menopause symptoms can create mood swings, dizziness, fatigue, stress, etc. During these time, it's very hard for them to be active in their daily routines. So the touch switch option can be used to control or automate any three of their needs which can be fulfilled with a touch. It can be like, sharing of their live location with a single touch in case of any emergencies (widening the application level to support women for facing social challenges too) or be like controlling any device remotely or like automation of any device and will be better if all such features can be include in a single software application platform.

What's Next....? Coming into this question, the answer is that a very powerful Mobile Companion Application for hWatch (If hWatch can satisfy the requirements of fetching data from body) incorporating the above mentioned, from aspects to reality with practical validation and researches for making feminine life better and better.

Current Drawbacks and Next Revision